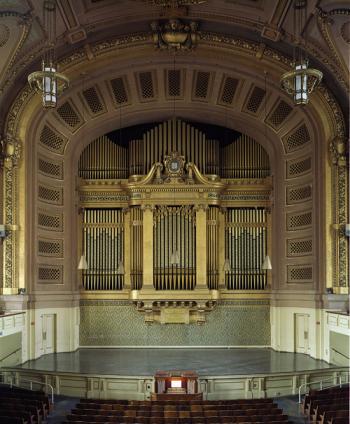 Looming above and behind the Woolsey Hall stage is the Newberry Memorial Organ, one of the most renowned Romantic organs in the world.

The organ is named for John Stoughton Newberry, whose family had given Yale $50,000 for the building of the original Hutchings organ in 1903, and similar amounts for its renovation by Steere in 1915 and its rebuilding in 1928 by the firm of E.M. Skinner of Boston, considered the “Rolls-Royce of organbuilders.” Some 5,000 of the pipes and other components were recycled from the earlier organs to create an instrument of heroic proportions.In the decades that followed, the late nineteenth-century Romantic organ music and the once-popular orchestral transcriptions for the organ fell out of favor with the concertgoing public. Other Skinner organs from that era were allowed to fall into disrepair or were replaced. The Newberry Memorial Organ remains in original condition to this day.

The instrument is a monument to the craft of organbuilding and the technology of that time, with its

Above photo by Robert A. Lisak.