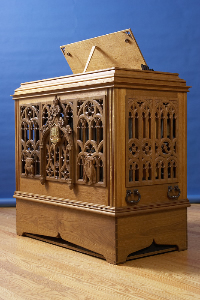 Our continuo organ, built by Taylor and Boody Organbuilders of Staunton, Virginia, will be an important component of the performing scene at Yale for many years to come.

The organ stands about 3-1/2 feet tall, 2 feet deep, and 3-2/3 feet wide. The keyboard is made of boxwood and ebony, and the case is made of superbly carved white oak. The gothic-style carvings are typical of those in much of Yale’s central campus architecture. At the center of the rear of the case is the Yale seal, and flanked on either side by two bulldogs.

The most essential part of any organ is its sound, and this one is no exception. The sounds in this organ range from sweet and gentle to brilliant and sparkling. Each stop is voiced with care, and even with only five stops, the combinations are varied and plentiful. The organ specification is as follows:

The organ is in two parts: the top part contains the chests, pipes and keyboards, and the bottom portion contains the base, the blower and the bellows. Weighing in at about 200 pounds, the instrument is easily portable by two people, and can fit into a van without a problem.

This instrument will have many uses and will be seen in a variety of venues on campus. Primarily it will be featured as a continuo organ in performance by the Yale Schola Cantorum and Yale Camerata, but it can also play very beautifully some of the solo organ repertoire that is written for one keyboard alone. The Sesquialtera, for instance, will make some Spanish baroque music come alive. It may be that the organ will accompany our choirs on some of their tours as well. It will make its continuo debut in the November 6 concert of the Schola Cantorum; and will be featured in December in both continuo and solo capacities in the concerts of Schola and the Camerata.

The ISM is grateful and fortunate to have such an elegant new instrument in our midst and we are confident that it will inspire generations of listeners long into the future.

Click here to see more photos of the continuo organ.