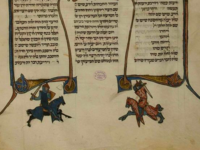 This conference will be free and open to the public via Zoom Webinar. Registration is required.

Register for this conference

In the late Middle Ages, Jewish authors engaged with non-Jewish, vernacular literature to create new texts for Jewish audiences in a style that resembles medieval romance. Drawing on the popular vernacular stories of King Arthur, Alexander the Great, and heroic knights, some Jewish authors employed a variety of techniques to make these texts appropriate for Jewish audiences, including references to biblical events or replacement of non-Jewish words with ones relating to the practice of Judaism. Other Jewish authors, however, avoided biblical or pious language when crafting their new versions, putting into question the common assumption of an inextricable link between medieval Jewish piety and culture.

The contribution of medieval Jews and their participation in the narration and transmission of courtly non-religious literature has been largely overlooked in the past. Only in the past few decades have scholars focused on texts that can be considered part of a corpus of Jewish romance.

This conference brings together scholars working on medieval Jewish literature from varied perspectives to enable a cross-disciplinary, trans-institutional, and international dialogue that aims to highlight understudied voices in medieval literature and their significance. This approach allows conversations between Jewish texts globally, rather than traditional distinctions between geographical regions. Our participants have affiliations in diverse university departments, including German Studies, Spanish and Portuguese Studies, English, and Medieval Studies, in addition to Jewish Studies. Their papers explore not only the role of cultural transmission and literary creativity in these Jewish texts but also the idea of narrative universality more broadly.